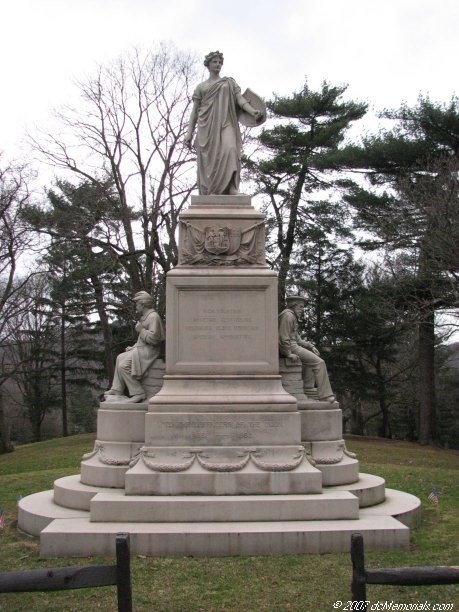 Only $20,000 separate the Soldiers and Sailors Monument from its new home beside West Virginia Independence Hall. So far, more than $100,000 has been raised for the effort.

The monument, originally dedicated at the corner of Sixteenth and Chapline streets, has been moved multiple times until being placed on the hill at Wheeling Park, its current location.

“The years have taken their toll, and the monument has lost various elements, endured vandalism, and in general remained out of sight, out of mind,” said Bekah Karelis, a Wheeling Heritage project manager and member of the Wheeling Civil War Monument Committee.

Now, the committee is raising funds to bring this important monument back to downtown Wheeling. The state of West Virginia has agreed to its placement in the grassy area north of West Virginia Independence Hall, a building known as the Birthplace of West Virginia. The monument’s relocation to this spot would enhance the iconic building and complement its history.

“Ours is the largest Union monument in the state, and this relocation would return it to within a block of its former home,” explained Karelis. “It would further beautify the city of Wheeling and be more accessible to the public while being protected by the state’s Division of Culture and History.”

Help us reach our goal!

To make a tax-deductible contribution to the Soldiers and Sailors Monument relocation, fill out the form below.